They’re some of the most technologically advanced machines in drag racing today. Pro stock cars competing in the National Hot Rod Association (NHRA) professional racing series are often called factory hot rods because they look like the everyday autos that come off the factory floor. Keeping that factory appearance allows fans to relate their personal vehicle to that of their racing heroes. But pro stock cars have to conform to precise measurements and weigh no less than 2,350 pounds. The measurements and weight requirement are something the team at CG Detroit know very well. CG created the graphics for the new Marathon Petroleum Corporation/J&J Racing Pro Stock Dodge Dart GT Pro Stock car for 2012 NHRA Mello Yello Pro Stock world champion Allen Johnson. The designer is 17- year CG veteran Joe Mikulas. “I can’t tell you how cool it is on Sunday, to turn on the TV and see my product going down the track at 205 miles per hour — it’s just cool,” says CG Art Director and Graphics Designer Joe Mikulas.

Mikulas was called on by sister company, J.R. Thompson, to submit an old illustration of a Pro Stock car so representatives could use it in a presentation created to win Johnson a new sponsor – Marathon Petroleum Corporation. Instead, when Mikulas found out it was for CG’s long-time client, he decided to go all out and create a new design hoping to help Johnson win the backing. 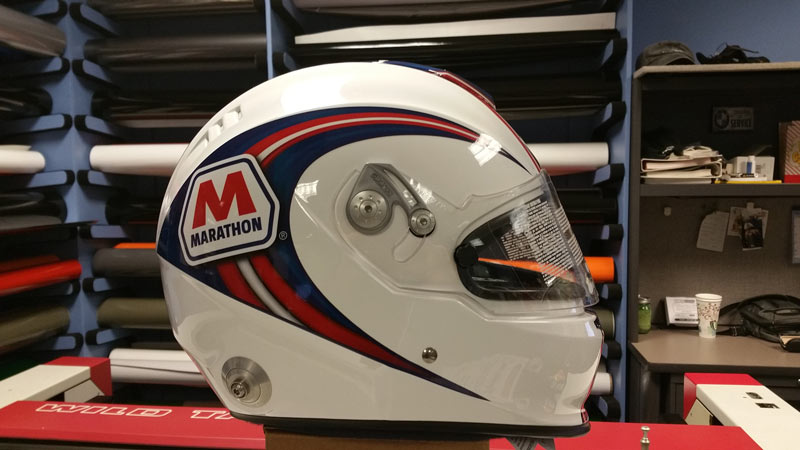 “We didn’t know anything was going to come of it, we just wanted to help Allen Johnson. But Marathon loved the design so much, they not only decided to sponsor Johnson, they also wanted to do our paint scheme” says Mikulas. “It’s very exciting to have him (Johnson) as a partner again.”

“Joe (Mikulas), Karen (Spencer) and the installation team at CG Detroit were awesome and very helpful” says Allen Johnson. “I really feel they went the extra mile and played a role in helping us secure our sponsorship with Marathon.”

All the excitement began last October and by January of this year, CG got the job to do the design work and wrap of the race car and the car’s transporter truck. A helmet was added to the mix later. Mikulas spent a day working on the original designs and only had to make a few tweaks before Marathon approved them.

“I based the design of the car and trailer on what I found on Marathon’s website” says Mikulas. “Marathon has an American feel, but I didn’t want to use the American flag so I decided to make it simple. I was trying to create a paint scheme that would help promote Allen Johnson racing and get the fans excited, plus I wanted it to read clearly on TV.”

Mikulas went to Jerry Haas Race Cars in Fenton, Missouri where the Dodge Dart GT pro stock car was built and took photographs and created the templates. He said a lot of engineering goes into these designs. “When I design, I have to keep in mind where my transitions are in the paint scheme so I can hide seams and lines. I could come up with some crazy design, but if I design myself out of the ability to execute it, then it becomes a failure” Mikulas says.

The logos and the rest of the scheme were built into the wrap. It was created as one piece to reduce weight and costs Mikulas says. “Our main goal is to make the design look like paint, not a decal.”

The design is a great success. “The installation team did a great job in getting me to those first test sessions by working late into the night for several days” says Johnson. “Their work ethic is amazing and the design team is really imaginative and creative. Thanks CG Detroit!” You can see the Marathon Petroleum Corporation/J&J Racing Pro Stock Dodge Dart GT racing for the NHRA.